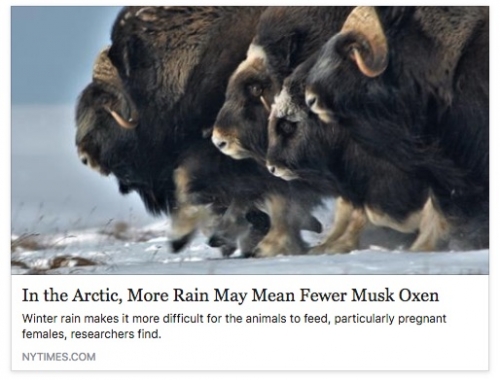 It’s hard to miss a musk ox: It looks like a buffalo decked out in a hairy fur coat. And yet this easy-to-spot giant, which lives on tundras from Siberia to Greenland, is still surprisingly mysterious.

“Here is the largest land mammal of the polar zones, but we hardly know anything about musk oxen,” said Joel Berger, a wildlife biologist at Colorado State University and a senior scientist at the Wildlife Conservation Society. Dr. Berger has studied musk oxen in Alaska for nearly a decade, and on Thursday in the journal Nature, he and his colleagues reported a disturbing finding: Musk oxen are unexpectedly vulnerable to rapid climate change in the Arctic.

In a warming landscape, pregnant female musk oxen may struggle to find enough food for their unborn calves, the researchers found. Their undersized offspring may die young or fail to produce many calves of their own. In places, musk oxen may disappear altogether.  The study is the first to suggest a strong link between increasing winter rainfall and the declining health of Arctic mammals, said R. Terry Bowyer, a senior research scientist at the Institute of Arctic Biology in Fairbanks, Alaska, who was not involved in the research.

Other grazing species, like caribou or Dall sheep, also may be harmed by increasing rain in the Arctic, Dr. Bowyer said: “It bodes poorly for big mammals.” A decade ago, Dr. Berger began traveling to Alaska to gather data on musk oxen. Each summer, he and his colleagues cruised across the frozen tundra in a sort of snow tractor until they found a herd. Rather than running away, the animals would form a defensive circle. Dr. Berger used long-lens cameras to snap photographs of individuals and bounced lasers off them to determine how far away they were. Back at his office, Dr. Berger and his colleagues examined the pictures to determine how young musk oxen were growing each summer. It was a tough job. “In the wind, their hair is fluttering all over the place, so we don’t know where the hair stops and the body begins,” Dr. Berger said. Fortunately, a musk ox’s face has short hair, and the size of a musk ox’s head is a good indicator of its overall body size. “Our accuracy in measuring head size is about 99 percent,” Dr. Berger said. Calves born in some years remained undersized even three years after birth, he and his colleagues found. To determine why, they also gathered data about the conditions in which the musk oxen lived. One factor emerged as a major predictor of size: how often rain fell during the winter. Females that were pregnant during winters with a lot of rain gave birth to undersized calves, sometimes as much as 15 percent smaller. Dr. Berger started collaborating with Russian scientists to study a population of musk oxen on Wrangel Island, off the coast of northeastern Siberia. The island receives more than twice as many rainfalls during the winter as Dr. Berger’s research sites in Alaska. And on Wrangel Island, he and his colleagues discovered, young musk oxen had significantly smaller heads than their Alaskan cousins.

Normally, musk oxen survive each winter by pushing their snouts through snow to find lichen, moss and other plants. When rain falls, it freezes and form an icy barrier over the food. Dr. Berger suspects that’s why winter rain leaves musk oxen struggling to eat. A pregnant female musk ox is especially vulnerable: “She’s starting her gestating fetus,” Dr. Berger said. The calves of these undernourished mothers will be born small, and they will stay undersized even if they find a regular supply of food as they mature.

Research on other big mammals indicates that being born small leaves animals more vulnerable to starvation and disease as they grow. Dr. Berger suspects that his analysis actually underestimates the impact of winter rain. He and his colleagues were able to photograph only young musk oxen that had survived each winter, so it is possible that they missed runts that died between visits. Runts can be bad for the entire herd. Even if small animals survive their early years, it may take them longer to become sexually mature. Winter rain, then, may push down musk oxen populations. These findings are more worrisome because of the drastic change humans are bringing to the climate. The Arctic itself is warming at twice the average global rate.

Researchers have focused much of their attention on the Arctic Ocean, which is losing much of its ice. Algae are growing much more vigorously in the warmer climate. Polar bears are losing some of the sea ice they need to hunt for seals, leaving them vulnerable to extinction in decades to come. Climate change is threatening to land mammals, as well. If winter rains become more common in places like Siberia and Alaska, Dr. Berger warned, the range of musk oxen may drastically shrink. Indeed, they may survive only in places like northern Greenland, which has remained drier and colder than other parts of the Arctic.

Dr. Berger cautioned that he and his colleagues followed musk oxen only until they were three years old. It will take much more data to determine the long-term fate of the animals. “Most people don’t do that much groundwork on the Arctic because it’s hard to get around,” Dr. Berger said. “It’s no big surprise we know very little.”