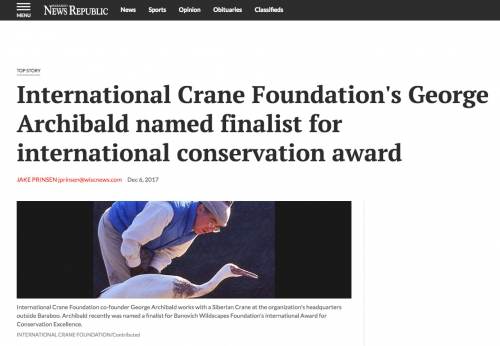 George Archibald has been named one of five finalists for the Banovich Wildscapes Foundation’s inaugural Award for Conservation Excellence.

The co-founder of the Baraboo-based International Crane Foundation could receive $100,000 during a February awards ceremony in Charleston, South Carolina, should he take home the top honor. The international award recognizes exceptional contributors to wildlife conservation around the world.

“The award will recognize a conservationist’s long-term commitment to making our planet a better place, and empower people in both local and international communities to advance wildlife conservation,” according to a Banovich Wildlife Foundation press release.

Archibald’s 50 years of leadership in international conservation efforts paved the way for crane conservation worldwide, according to the crane foundation’s leaders. When many cranes species were on the brink of extinction in 1973, Archibald and his Cornell University colleague, Ronald Sauey, established the International Crane Foundation in Baraboo as the world headquarters for the study and preservation of the birds.

Soon after, Archibald pioneered innovative breeding techniques that allowed many rare crane species to reproduce in captivity for the first time. He also forged scientific exchanges and field conservation programs with Chinese and Russian biologists in the 1970s.

“George’s life is about being a catalyst,” she said. “It’s about getting things started, identifying amazing talent and then handing the torch to that person.”

“There are daunting challenges in conservation that would easily bring down lesser people.”

Under Archibald’s leadership, the International Crane Foundation has grown into a globally respected organization with more than 50 employees. The organization supports conservation projects in more than 50 countries on five continents.

As a finalist for the Award for Conservation Excellence, Archibald will receive a $5,000 Cabela’s gift certificate donated by Cabela’s Outdoor Fund, and a $5,000 cash award donated by Bass Pro Shops. Other finalists include Joel Berger of Colorado, K. Ullas Karanth of India, David Macdonald of the United Kingdom and Timothy McClanahan of Kenya.

If Archibald wins the $100,000 first-place prize — which was donated by Cabela’s Outdoor Fund and the Cabela Family Foundation — Didrickson said the money will be used to fund programs at the International Crane Foundation.

“It would immediately go to work for conservation,” she said.